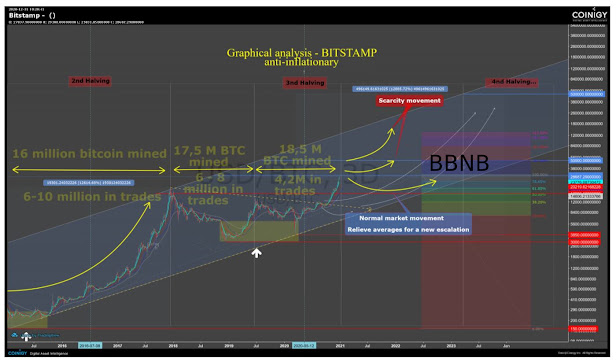 Bitcoin scarcity is and will be the forerunner for bullish movements never ever seen in an asset until today. The existing upward movement is stretched, but having less bitcoins available in the market has been decreasing each and every day, this makes any bet from this upward trend very risky. Every asset growing exponentially tends to improve with time because of the normal realization of profits available in the market, but as we are in times of chaos and uncertainty worldwide, we genuinely believe that now it won't happen with the key protection asset against industry CHAOS nationwide and worldwide.

The total market cap is very close to breaking its 2018 high where 71% of that value is represented by bitcoin.This shows that there are great chances of reaching absolute dominance above 80% in the next year due to its scarcity and its strong anti-inflationary system.The world is experiencing the brutality of an inviolable idea, many who criticized and scoffed at the beginning saying that it was child's play, today are desperate, angry, regretful, and inventing all kinds of bubble theory. 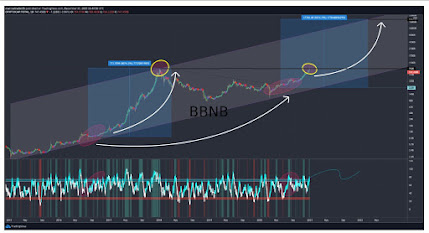 When something is born in the middle of chaos it is prepared to overcome chaos.Satoshi Nakamoto knew well when he started the genesis block, that in the world there will always be chaos, and that the only way to fight it would be with an immutable idea, where no one would own it, nothing centralized and that over 10 years would be the beginning the great transition.Every day the world governments inflate their own currencies more, thus promoting a devaluation of them. This massive impression ends up affecting all sectors and directly in the price of the raw material, forcing the lack of world input.Large investors have no other choice but to look for a safe asset, easy to store and with a limited issue, which has clear rules and which has its issue cut in half every 4 years.Yes, this asset exists, it is one that many people scoffed at being a nerdy game, which at the moment is "expensive", but we believe that it is still cheap and there is time for institutional investors to put their billions of dollars in it.2020 was the year that most used digital account and digital money, governments around the world are changing their system of issuing colored paper based on the honesty of politicians. Paper money will get more and more dead every day, with that, bitcoin will become more and more known and alive.The evolution of money has started, and a new low-cost storage reserve, easily accessible, with no third-party involvement in storage and with 100% security, starts to gain space and will fight until it finishes yet another competitor, GOLD.2021 is going to be a year of turmoil with the arrival of institutional investors and as a result, it will increase the attention of regulators, who will try to reach bitcoin by the weakest part of the market which is the altcoins, but all this will not make much difference in the long run because everything tends to go in search of a solid monetary policy offered only by bitcoin.

Posted by Blockchain Assets at 13:28